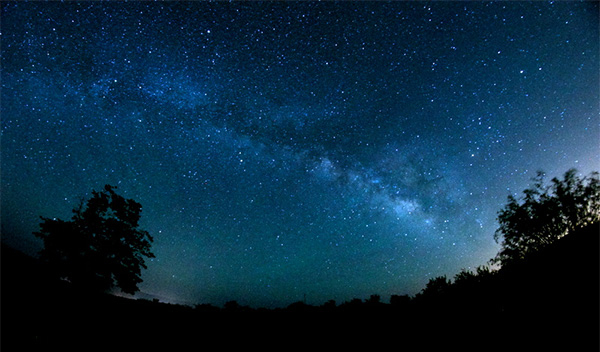 In Oracle, Arizona, “star parties” have nothing to do with celebrities. Unless you consider the Milky Way a famed luminary. (Perhaps you should.)

Star parties at Oracle State Park celebrate the night sky, and if it’s a clear night you’re almost guaranteed to see stars and the Milky Way.


Since 2014, the 4,000-acre wildlife refuge in the northern foothills of the Catalina Mountains has been designated as an official International Dark Sky Park.

It’s the first state park in Arizona to receive the designation by the International Dark-Sky Association (IDA), a non-profit organization working to protect night skies for current and future generations. The Dark Sky Places program encourages communities around the world to preserve and protect dark sites through responsible lighting polices and public education. It offers designations for communities, parks, reserves, zones, and developments around the world.

For the designation, sky lovers can thank Michael Weasner, an amateur astronomer and former US Air Force fighter pilot who chairs the Oracle Dark Skies Committee.

In love with the night sky

As a boy, Weasner’s older brother would take him into backyard and show him the sky, pointing out constellations of stars. “I fell in love with the night sky,” he said.

That same brother got him a subscription to Sky and Telescope magazine. “That was 1962. I’ve had it ever since. And I still have all the issues, which my wife doesn’t like.”

Weasner got a degree in astrophysics at Indiana University and as U.S. fighter pilot “could see the night sky from the cockpit of a jet fighter.”

“I always knew I wanted to retire to a dark area,” he said.

So when he and his wife moved to their retirement land in Oracle, he built a small astronomical observatory on his property.


But he didn’t want to keep the dark sky to himself.

Weasner got to work convincing his neighbors and the staff of Oracle State Park, a park with 15 miles of hiking trails, picnic areas, and environmental education programs, to submit the park for the IDA designation.

Weasner knew the park was dark, but he had to prove it by taking measurements of darkness from the park and surrounding areas. The process involved retrofitting some of the lights in the park, documenting its public outreach programs, and getting the community on board. He organized a group of volunteers who helped with the tasks. They submitted an application to IDA in 2014 and were approved the same year.

The Way to the Milky Way

Weasner believes everyone should be able to enjoy the skies. He wears a pin on his jacket that says “No Light Pollution.”

Once, in New York City, in front of Rockefeller Center, a funny thing happened. “I was standing there and this guy sees that pin and comes up to me and looks me square in the eye and says, ‘You support heavy pollution?’”

The man had been born and raised in the city, Weasner learned. “He’d never been outside of the city. Occasionally he saw the moon, but he had no concept of what being under a dark sky was like.”

IDA estimates that 80 percent of people around the world cannot see the Milky Way.

Weasner said when visitors from New York, Boston, and Los Angeles come to the park, “They’re totally blown away because they can see the Milky Way,” he said. “The draw of a good night sky is hard to beat, whether you’re looking through a telescope or not.”


Being able to see the stars is part of our human heritage, especially important for agricultural and religious reasons. “People get very emotional about what they see up there. It’s ingrained in us as humans,” he said.

As Weasner expected, the Dark Sky Park designation at Oracle State Park has made night-sky viewing events or “star parties” much more popular. Once, gatherings drew 50 to 60 people. Now they draw 250 to 350 people, even on cloudy and cold nights, he said.

Stars are good for your health and pocketbook

Beyond just enjoyment, there are other reasons why it’s important to be able to see the stars at night.

Our circadian rhythms—our sleeping and waking schedule—are influenced by natural day-night cycles. Artificial light can interrupt those natural rhythms, suppressing the production of melatonin, a hormone that helps us sleep, and helps both our immune and endocrine systems function well.

“Humans, like animals, evolved with this day/night cycle. There are certain things our bodies do in the dark to heal. All this extra light at night or when you’re looking at screen you’re delaying the onset of all the healing the body wants to do,” Weasner said.

Weasner has an easy way of illustrating the impacts on wildlife. “People with scorpion problems. I say to them, ‘Do you have a porch light that attracts a lot of bugs? You’re probably attracting scorpions then.’ It’s all interrelated.”

Then there are economic factors.

IDA estimates that in the United States alone, $3 billion in annual energy costs are lost to “sky glow,” or light pollution. “The cost is really astronomical, no pun intended,” Weasner said.

Many people think they need more light to be safe and secure, but Weasner says some lights are necessary but too many will actually create less security.

Light demonstrations have shown that often streetlights, porch lights, and driveway lights end up blinding people to what’s in front of them, Weasner said. Even bright LED stoplights can be too bright in dark areas.

You can determine light pollution where you live using this interactive map from the New World Atlas of Artificial Sky Brightness. Also, to see a bird’s eye view of lights in your town, visit the NASA Blue Marble Navigator. This Globe at Night interactive light pollution map was created with eight years of data collected by citizen scientists.

The next star party in Oracle State Park happens in January or March. Besides stars, the event features educational speakers, telescopes, and live music at sunset.

In the meantime, Weasner hopes you’ll find your own dark places and look up. “This is part of us. As humans we have enjoyed this night sky for thousands and thousands of years. And we’re hiding it behind this unnecessary light.”

The International Dark-Sky Association, with headquarters in Tucson, has lots of useful information about official Dark Sky Place designations, the impacts of light pollution, and how to keep our skies dark.

Dark Nights: The Spiritual Promise of Grief Work
Next Post: LumiNight: A Love Letter to Winter in the Desert