You are here: Home / BorderLore / From Cameroon to the Desert: Atelier Diama Designs by Tradition 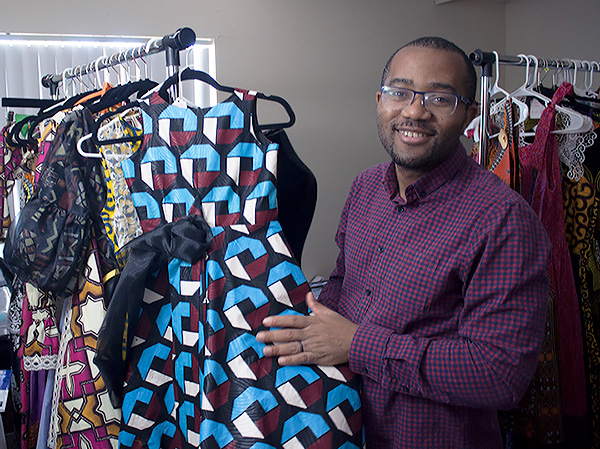 “This is the first collection,” says Ndifor Chesi, as he gestures to a rack full of brightly patterned dresses. Chesi is the designer for Atelier Diama, a Tucson-based designer clothing studio. He pulls out a lime green and brown short dress with an open back and a V-neckline, and places it on the mannequin, running his fingers along tiny triangles on the neckline. Attention to detail is everything to Chesi. He learned that from his mom.

Chesi grew up in Cameroon where his mother ran her own design studio, atelier in French, and her handiwork was the primary source of income for the family, including her six children. Her dedication to elegance and artistry inspired Chesi to follow in her tradition, designing clothes that make people feel like the best version of themselves. From a young age, Chesi looked on in awe as his mother turned fragments of fabric into masterpieces.

“As a little boy, I was quite curious,” Chesi says. “I’d ask: Why do you do this? Why do you cut it like this? What is the meaning of this? She was really patient and explained it to me.”

At 13, he began assisting her in the studio after school several times a week. When she went to choir practice or to visit with friends, Chesi stayed in the shop and took orders. But he also used that time to hop on her manual Singer sewing machine, taking discarded remnants and stitching pieces for his niece and nephew. After he started boarding school, Chesi spent entire summers learning from her. She told him, “Oh, wow, you really do have an eye for this,” and made him her apprentice.

Chesi launched Atelier Diama, the brand, in Tucson January 2018. His sister runs a studio of the same name in Cameroon. The brand is named for his mother and represents her lineage and legacy, he says. Diama means “sister” in the dialect Bameleke and was the name everyone called Chesi’s mom, including her children. He says he puts some aspect of her aesthetic in each piece.

In the apartment space that serves as his studio, reams of fabric in turquoise and coral are stacked on shelves, a sewing machine sits at rest, and a folding table holds silver fabric that will become Chesi’s next custom-made garment, a Quinceañera dress.

When Chesi talks about design, his enthusiasm emanates. This is particularly true when he talks about making bespoke—or made to order—garments for customers. “I look at you,” he says, “and think what is a design that would work well with you. How can I  turn this fabric in such a way to make it different? Add elements, cross patterns and palettes. It’s like a puzzle, you can cut from here and here and put them together to form something different.”

When Chesi first came to the United States, it was to attend college at Georgia State University. His mother considered her children’s education opportunities to be their inheritance. “She believed knowledge is power,” he says. “And she worked hard for that—to send me and my brothers and sisters to college.” He completed both undergraduate and graduate degrees in finance and worked a full-time corporate job, which he says gave him an advantage when starting the business. For a year before the launch in January, he worked nine to five at his day job and then came home and worked on Atelier Diama from six to ten. He continued planning, designing, and sewing on weekends.

Today, Chesi is Atelier Diama’s only full-time employee, but he has part-time support. His husband John Chesi runs social media and marketing, and Delia Mance, Chesi’s best friend from college who inspired him to move to Tucson in 2017, covers business logistics.

The first time I saw Atelier Diama garments was at the spring 2018 Cultivate Tucson, a pop-up market featuring local artisans’ work. I walked in and was transfixed by the brightly patterned garments, which I found classic and modern at the same time. One dress in particular caught my eye. Blending classic mid-century aesthetic with African patterning, the dress was full-skirted and cinched at the waist–a marigold Dashiki bodice, giving way to layers of skirt in pink, gold, and white.

In his studio, Chesi shows me the “Tati” dress. He lifts up the skirt to reveal purple tulle underneath, which gives the dress its fullness. Then he pulls off a pink overskirt to reveal the base dress. One garment, two looks.

All of Atelier Diama’s designs are made to be both fashionable and functional, he says. Most of his dresses and skirts have pockets.

“I don’t want to design something you are uncomfortable wearing in public,” Chesi says. “I want you to wear something where you feel daring, comfortable, and beautiful.”

His colleague Mance often says: If you want simple, you’re in the wrong place. Chesi laughs, “’Cause we don’t do simple. We do fashion. We do function. We do flirty-ness.”

Chesi stitches all the bespoke garments and collection samples in-house. The others are sewn by his sister and her assistants in Cameroon or locally by refugee women in Arizona who come primarily from East and West Africa. Altier Diama dresses run in price from $64 to $500.

Chesi says he designs in different age brackets—wanting people of all age ranges to have access clothing that is chic and comfortable. When creating a collection, Atelier Diama typically makes five of each size. Designs are fitted from zero to 3XL in women’s clothing and zero to 4XL in men’s. In May, the shop released its first men’s line in time for Father’s Day. The line, modeled by his husband, included a shirt with ventilating circles and a side zipper, a lightweight style inspired by motorcycle jackets.

Chesi typically flies to New York monthly to pick out fabric but prefers buying in bulk in Asia and Cameroon, where he visits twice a year. Although most of his patterns are African, he is careful to pick neutral patterns, ones without ties to specific tribes or regions. He sometimes also designs his own patterns and has fabric made to order.

Since moving to Tucson in 2017, Chesi takes inspiration from the Sonoran Desert. It comes through not only in his use of breathable fabrics and lightweight styles, but also in how he uses bright colors to play against the landscape. “Where you live will eventually influence how you make your clothes,” Chesi says. “When I think of Tucson, I think of something that is beautiful, airy. We want to bring color to the desert. I want people to stand out. Our design is about those who dare to be bold.”

An avid traveler, Chesi is also influenced by different cultures, including French and African styles, and soon plans to use Japanese fabric for new styles. “Diversity is something we embrace—fusing cultures and doing something unique while staying true to who we are,” he says.

The Cultivate market brought the brand visibility in Tucson along with several repeat clients. While much of Atelier Diama’s sales come from online shopping, Chesi plans to open a brick-and-mortar shop in Tucson. He’ll also participate this fall in a fashion show, Bring Wakanda Alive, inspired by Black Panther and organized by Tucson dancer and designer, Barbea Williams.

For the show, which will feature four Tucson designers, Atelier Diama has been assigned the Mining Tribe, a fictional tribe from the film. “We’re using the concept of vibranium in fabric and thinking about what will the future generation wear?” he says. “We’re going to bring you Paris in Tucson.”

Through it all, the heartbeat of Atelier Diama is the way the process and products allow Chesi to stay connected with his mother. “Every time I decide to stitch something, there is still that connection between me and her. It takes me back to times we had in the shop,” he says. “I try to be very detailed because that’s what she was good at. I will not compromise beauty for anything.”

Lisa M. O’Neill is a Tucson-based writer whose work operates at the intersection of popular culture, politics, place, and social justice issues. Her writing has appeared in Bitch, Edible Baja Arizona, Everyday Feminism, GOOD, Good Housekeeping, Talk Poverty, and Salon, among others.

Taking the Park to the People: The Changing Culture of the National Park Service
Next Post: Jeff Chang Returns to AZ