You are here: Home / Fieldschool / Learning from Ajo, AZ: What a Fieldschool Taught Me about Desert Life

I had to grow as old as a saguaro with arms before I saw one in nature. I knew the iconic plant from the Old El Paso refried beans’ label, but I had to eat those beans for a long time before I learned the cactus’ name. They were simply the “you-know-those-cacti-with-arms,” or the backdrop for James Stewart when he was chasing outlaw “Dutch” to get back his Winchester ’73. My husband and I signed up for the 2016 Fieldschool of the Southwest Folklife Alliance because of a Facebook post – thank you, Steve Uyeda – and we were glad we did: we had a lot to learn because there “Ain’t no Saguaros in Texas.”

We had done our homework and read the material Leia Maahs had sent us, but we hoped that the rushed trip through the Desert Museum in Tucson an hour before closing time on Sunday evening would soften the edge of our ignorance. “Saguaro,” I repeated, hoping to remember.

We drove back to Tucson over the Gates Pass, a hazardous undertaking that almost landed us in a ravine because of the seductive beauty of saguaros to the left and to the right of the narrow road. The next day we took the 86 West to Ajo, Arizona, as Kitt Peak, the U.S. Border Patrol, washes and dips, Tohono O’odham, more saguaro, and teddy bear cholla cast their spell upon me.

In search of a cup of coffee we stopped in Sells. “There! Desert Rain Café,” I said. The café is celebrated for its use of wild and native foods.

“We are closed,” the young man with a black ponytail and flawless, copper skin informed us as we stood in front of the empty counter.

“Maybe we should leave,” I whispered.

“When do you open?” Steve asked.

“Oh, that is in ten minutes,” I exclaimed.

“Or maybe eleven,” he said.

This is how life should be.

“But I can make you a cup of coffee anyway,” the young man volunteered.

I felt like an intruder into an unknown, almost sacred world as we sat outside Sells’ post office, sipping coffee. But the people greeted us with smiles. We had a lot to learn. Fortunately, we were in good hands with the Southwest Folklife Alliance’s annual ethnographic fieldschool.

We drove another hour to Ajo, where exuberant bougainvillea and palm trees welcomed us at the Sonoran Desert Conference Center. The word “hacienda” popped into my head, even though my hacienda-knowledge was non-existent. Rows of doors behind a ramada enclosed a large yard where pomegranate bloomed, and green leaves of every size and hue basked in the Arizona spring sun. The Center had once been a school, which closed in 1995.

“Steve and Grace! Welcome,” a young man exclaimed before we even introduced ourselves. The Center’s managers, Stuart and his wife Emily, took good care of us. An hour later we gathered in a classroom with cookbook authors, engineers, journalists, grad students, poets, dancers, soldiers, and a past life regressionist.

Dr. Maribel Alvarez, anthropologist, folklorist, and community art expert, taught us to experience the ordinary, and to see the aesthetic of the overlooked. Kimi Eisele, who had written a moving and insightful account about her work with children in Nogales, a city on the Mexican side of the border, encouraged us to detect what is hidden in plain view, and to “notice what you don’t notice.” Josh Schachter, photographer and adventurer extraordinaire, pointed out how random things shape our lives (like a Facebook post for instance), as we explored the deceptiveness of photography and the power of visual storytelling.

Listening to James “Big Jim” Griffith’s keynote address every morning was a treat. I enjoyed watching him sitting in his power chair, as he lectured about poltergeists and pascola dances of the Yaqui, compared the baroque trompe l’oeil of Mission San Xavier del Bac to the non-functionality of Mexican lowriders, and Catholic saints to Ms. Piggy and Mickey Mouse. And I hoped that San Alejo, patron saint against bad neighbors, would help me with a problem back home if I only prayed fervently enough what Jim had taught us: San Alejo, San Alejo, que se alejan!

In the afternoons we learned how to make tortillas and tamales and enjoyed meals, one of which was prepared by Nina Sajovec, the founder of the Ajo Center for Sustainable Agriculture who transformed her passion for local food into a gourmet meal I will remember. 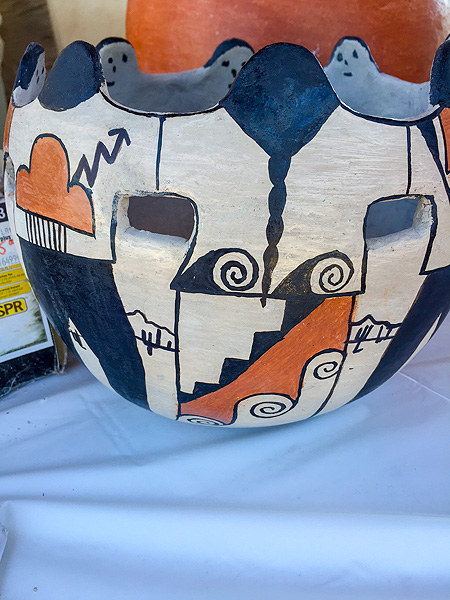 We drove into the desert to watch Rupert Angea transform clay, which he gathered from under a tree in his backyard, into artful pots. He decorated them with the Man in the Maze, and when he smiled at our cameras with his toothless grin, I imagined him as I’itoi, the creator god himself who, according to tradition, lives in a cave on the Baboquivari Mountain.

At the home of basketmaker and educator Regina Siquieros, we pricked our fingers trying to weave bear grass and devil’s claw, and were glad to put awls back into the box when the caterer of the Desert Rain Café arrived with our lunch. On our way home I bought a pair of woven earrings from the gift shop in Sells. They were expensive, but knowing about the skill, sweat, and song that go into these understated masterpieces, I knew the price was a bargain.

Lorraine Eiler took us on trips into the desert. She looked regal in her ironed denim pants and her exuberant red hat. I enjoyed learning from a member of the Hia C-ed O’odham people, who have called the Sonoran desert home for centuries. A place where everything that was alive pricked and stung seemed forbidding and dangerous to me.

Lorraine showed us the tiny leaves of the creosote bush, a cure-all when she was a child. “It also cures even bad breath,” she said.

The leaves tasted like frankincense when I chewed them, and I thought of the magi who crossed deserts too, and gazed at stars. Despite Lorraine’s caution, jumping cholla jumped on us, and we carried pieces of cactus to the van on our shawls, socks, and sneakers.

We marveled at the majestic saguaros all around us. Some stretched their arms strong and tall toward the sun, others, old and decrepit, dwindled like old men after a long, eventful life. When Lorraine explained that saguaros had to be treated like humans, and that destroying them was illegal in Arizona, it sounded like a truth I had understood intuitively. We watched woodpeckers and smaller birds disappear into saguaro spines and arms while Lorraine pointed to skeletal versions that looked like splintered crosses.

“These are called ribs. The wood is strong,” she explained. The O’odham people used those ribs to build the roof of St. Xavier del Bac near Tucson, the baroque masterpiece also known as the “Sistine Chapel of the New World.”

“In June we gather the fruit,” she said. I could picture ruby red juice dripping down her cheeks in celebration. The next day she brought us saguaro fruit syrup, and we tasted the delicacy on vanilla ice cream, aware that we were enjoying a rare treat since harvesting the decadent fruit was a privilege of the “people,” the O’odham.

“I will show you where I grew up,” Lorraine said as we piled into the van. When we stopped a mile down the dirt path, the Border Patrol drove by, leaving a trail of dust behind.

“The desert was my playground until I was twelve,” Lorraine explained, pointing to a ruin of cement blocks between mesquite trees and saguaro spears.

“We lived here,” she said. “In summer dad carried our beds outside. Mom covered them with nets which we bought from Sears, and dad put the metal legs into cans filled with water to protect us from scorpions.”

The wind lifted the rim of her hat, and I noticed the part of her hair and her gray braids. “When they did not come anymore to pick us up to go to school, we moved into a company house,” she said, pointing in the direction of the tailings that glistened yellow, green and rust in the noon sun. “Wherever we moved, it became Federal Land.”

On the way back to the town, she remained silent, and I stopped pestering her with my questions about cacti and washes, amaranth and organ pipe syrup. Was she thinking about those nights, tucked in under the stars? Was she remembering the scent of the creosote and the lullaby the desert sang for her so long ago?

After breakfast, the day before our departure, I met a farmer named Sterling, who worked in the Sonoran Desert Conference Center’s garden. He wiped the sweat from his forehead and pushed his ebony hair back.

“I am not from here,” he said. “In my culture it is impolite to talk about things when you are not from the place. I talk through my work,” he said and motioned to the beds of luscious leaves around him.

In the following weeks I thought about Sterling’s statement many times: when I talked like a radio station with a broken off switch, when I used words like substantiate and contextualize because I wanted to sound intelligent, whenever I marked my space with small talk or pontificated about what I had learned. I thought of Sterling when I talked about what I had done in the past, and what I would do in the future. I wished that, like him, I could talk instead through leaves, through my work.

But I might have to go back to the people of the desert many more times before I can do that. Maybe changing, one delicious mouthful at a time, takes decades, or even generations, of practice.

Grace Megnet, MFA is art instructor at Lamar State College – Port Arthur, TX. For fun she took creative writing classes at Lamar University and was hooked. A Swiss native, she feels truly American only when she writes, because writing enables her to hide her accent. She participated in the 2016 Fieldschool of the Southwest Folklife Alliance and fell in love with the Sonoran Desert and its people. She lives in Beaumont, TX with her husband Steve and a cat.