You are here: Home / BorderLore / Thinking Like a Folklorist: Depth and Meaning in the Small Sample 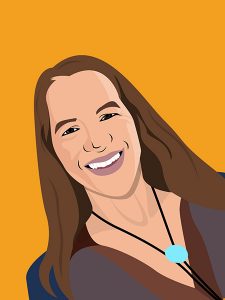 For most of my life, I’ve been guided by my ability to talk with just about anybody about anything, fascinated by stories and eager to make sense of the unknown. At age 36, along a winding road of cross-country moves and motherhood toward my true vocation, I headed back to graduate school to study anthropology.

At the University of Arizona, a school I chose for its proximity to the border and my affinity for the desert, I researched emotional suffering in the local Mexican immigrant community, documenting a perfect storm of migration related stressors, which I argue contribute to widespread health declines in this community. I was awarded my PhD in 2016 and began working locally as an applied anthropologist. Just a few months later I found myself on Tucson’s South 12th Avenue, being asked to “think like a folklorist.”

I’d been hired as lead ethnographer on a team gathered to explore foodways and growing traditions along south Tucson’s “La Doce”—the affectionate name for the neighborhoods along the commercial stretch of South 12th Avenue from 44th Street to Drexel Avenue.

My first task was to train a cohort of about 20 “citizen folklorists” (primarily youth from Pueblo High School) to conduct ethnographic research in their neighborhood. The model was that of the “citizen scientist,” in which everyday citizens are trained and then deputized to participate actively in collecting data related to the natural world. The citizen folklorists of La Doce, however, would collect data about food traditions, backyard gardens, and recipes, through mapping, questionnaires, and filmed interviews.

The broad scope of the project initially daunted me, particularly the idea of effectively preparing the youth to gather data. But Maribel Alvarez, a true folklorist and executive director of the Southwest Folklife Alliance, one of the partners on the project, told me not to worry—this was not my project. Rather, community organizer Nelda Ruiz from Tierra Y Libertad Organization (TYLO) would take the lead and be our primary link for engaging with the local community. Nelda had been active in the area for decades, and she quickly became my trusted colleague and friend.

Compared to the years it took me to prepare for fieldwork in graduate school, the training felt cursory. My head spun with all the unknowns.

Together, Nelda and I developed a bilingual training curriculum for Team La Doce, covering mapping skills; definitions of ethnography, anthropology, and folklore; observation and documentation skills; foodways and food justice; and native plant identification. It was a fine course of study. But the reality of our grant timeline meant we had to start gathering data after just our first training. Armed with oversized maps, clipboards and multi-colored pens, we took to the streets. I had never done community mapping before. Compared to the years it took me to prepare for fieldwork in graduate school, the training felt cursory. My head spun with all the unknowns.

But this was not my project. Nelda knew the neighborhood like the back of her hand and so did all the youth. We walked past their homes and shops where they buy tortillas for dinner, following the shortcuts they take to school. Using mapping techniques we developed, the team members marked locations of native plants, edible fruits, abandoned lots, and green spaces. They saw an abundance of trash they had never noticed and lamented the lack of shaded walkways. They marveled at the care individuals take to create beauty in their homes. They never once got lost.

To my academically trained eye, the maps they made of those 40 blocks seemed in no way scientific. Each team member recorded their findings distinctly. Some maps were neat and sparse, others a barrage of images that looked like pages out of a “Where’s Waldo” book. I was eager to move onto the questionnaire phase, a method I used regularly as an applied anthropologist and one that felt more neutral and less interpretative. But first, the management team wanted to hear what we had learned from the mapping phase.

Together with the citizen folklorists we analyzed the maps, counting native trees, reading through our reflection pieces, and grouping common findings. Citrus was the most common tree … there was a lack of shade and green spaces … empty lots abounded … the mapping had shifted team members’ perspectives. I saw that despite the rushed nature of our training, and our unique individual mapping methods, our folklorist approach had produced some serious results. Team La Doce turned that information into four bilingual posters that were informative and visually stunning.

My prior methodological training was in applied anthropology, which lies on the data heavy side of anthropology and is often used to produce actionable results to non-profits, development organizations, and government agencies. I was trained to seek out large sample sizes, use official maps and census data, and apply a rigorous set of methods to ensure the reliability of research outcomes and analysis.

Thinking like a folklorist invited me to find depth and meaning in small sample sizes. The voices of the narrators themselves became the tools of inquiry.

Folklife finds answers in different places, relying more heavily on cultural expression and oral history. For me, working as a folklorist meant letting go of particular notions of “how to” and opening up to moments of wonderment. Our work along La Doce reinforced for me that keen observational skills and reflective documentation are powerful tools for research. Thinking like a folklorist invited me to find depth and meaning in small sample sizes. The voices of the narrators themselves became the tools of inquiry.

I brought my anthropological training to everything I did with Team La Doce. Along the way I learned, slowly, to dance with folklife. This meant a balance of looking for group-level trends and following rigorous methods and also opening myself to discovering the details in the corners, the fullness of every story.

This balance—between folklife and anthropology, academic research and community-led inquiry—bore fruit. Our findings moved well beyond the scope of food and into well-being, cultural heritage, and social transformation. Our team found that food acts as a means of cultural continuity and health maintenance. Residents shared their visions for common gathering spaces, more fresh foods, and safer streets. And the participants themselves saw anew their own community and their own potential. Project La Doce illuminated beauty previously obscured.

The project also changed me, the anthropologist, deepening my understanding of how to work in and with community, expanding my definition of “data,” and introducing me to the intimate lens of folklife. All the while, it forever endeared me to a vibrant community just over a mile from home.

Rebecca Crocker holds a PhD in cultural anthropology for the University of Arizona and serves as post-doctoral research specialist with the UA Bureau of Applied Research in Anthropology. She has collaborated with the Southwest Folklife Alliance on the La Doce Barrio Foodways Project and other programs.