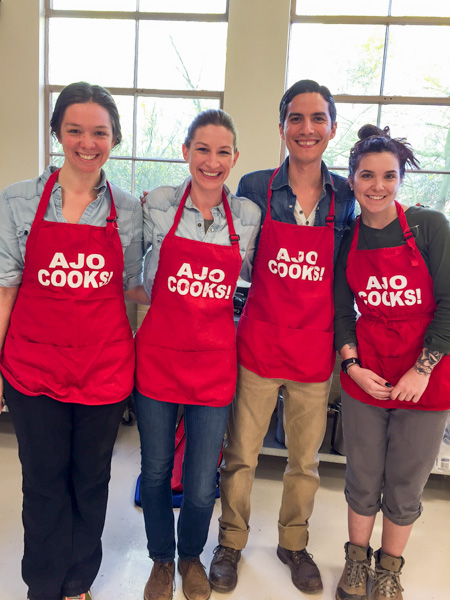 Ajo, Arizona
the three-cornered intersection of
Indigeneity, Spanish missions and settlers’ whiteness.
Haunted by the ghost of the capital-driven culture of mining.
Occupied by Border Patrol.
A town with a rich history of cultural exchange and a potent feeling of sorrow.
This place is coated in a fine film of not quite white dust
the color of bone and heavy with the silence of noonday sun,
not dissimilar to the deafness of snowfall on a moonlit night
(though much warmer and less blue.)
Sharp, dark thorns of mountains jut up through the rolling horizon.
I look up to feel the inaudible whirl of a kettle of buzzards’ wings
one hundred or more meters above me
because one does not hear these things in the desert.
The great vastness of the land that surrounds Ajo swallows the sounds
of civilization and nature alike.

The hands of an elder hold a green branch of creosote,
a plant I’ve heard cursed as a nuisance.
Lorraine wields the small, eager leaves with power that speaks of the knowledge that
creosote is anything but a nuisance.
Her hands carry the plant with the force of a grandmother’s warm palm on the shoulder of her granddaughter, soft and strong with old medicine and knowledge.
Below her, the shadow of her personage stretches beyond the bush
from which the branch came.
Only for a moment, Lorraine’s gentle voice becomes one
with the voice of the desert mother
Creosote, Hediondilla, Larrea tridentata
our gracious ancestor, who gives us the gift of healing
The knowledge of two powerful women spills through one mouth,
telling stories of childhood in the desert and the medicine of the earth.
One of the oldest living beings on this planet is a creosote plant
They call it the King Clone, a circle of bushes 70 feet wide
connected underground, all one plant
all almost 12,000 years old.
I think they should call it Queen Clone.

My momentary suspension of worldly feeling ends abruptly when
I see a colored fabric garment tied to a spindly branch of ocotillo.
The fabric alone may or may not have particular significance
but it calls my attention to the nature of the desert in which I stand.
Fewer than thirty miles away juts the rusted spine of a twisted, binational beast;
a border wall, a crumbling fence, a line in the sand.
Two halves that once coexisted, migrated across by the people of nations called
Tohono O’odham
and Pascua Yaqui
among countless other indigenous peoples,
(whose land my ancestors and I occupy)
now divided by a military-police force
(whose shell of authority stands atop humanity)
The groundwater hundreds of feet below my body is tainted with blood.

Some distance outside Ajo
Lies a scatter of squatty houses and trailers, two gas stations and a restaurant
Granny’s Kitchen
A spattering of buildings filled with almost cold sodas, malt-liquor and not-quite hot food.
Everything is an attempt to justify its own existence
by making a little money.
This place is called Why, Arizona.
It’s name is a testament to existential ponderance one finds themselves caught in
when stepping out of a vehicle into dusty martian landscape whose people
forced to fight for scraps.

Between Why and Ajo
lies the Ajo Substation
a fenced-in sprawling and pristine forest green sheathed cage.
Weaponized Border Patrol SUVs and tank-like pickup trucks barrel past
rolling over anything in the way.
An unsettling reminder of property and ownership
that even the desert must be patrolled.
The trucks are built with small cage structures in the beds, reminiscent of
the trucks of dog-catchers in the city.
Further evidence that this system values the lives of
migrant people as dehumanized.
Billions of dollars fund this hyper-militarized
mechanized, pressure sensing, tracking and cutting machine.
A system generated to “protect” this harsh landscape from
hungry children, and mothers who want to feed them.

Some distance down the
beaten and crumbling road
I find myself in the pueblo of Hickiwan,
Tohono O’odham nation.
The Angea family stands in the shade of their porch
Rupert’s hands fold red soil
Pulverized and sifted and pounded and filtered
Fine clay that he dug from a nearby hillside
brought together with water
A tradition and a method older than time,
He recounts his grandmother building pots in this same place.
Rupert’s gentle eyes glow with the light of
one whose traditions have survived the pressures against them.
His hands are strikingly similar in color to that of the clay
They know each other intimately and almost blend together.
And especially when caked with clay and meditatively building a pot
He could be built from clay himself.
It occurred to me that there is immense dignity in the preservation of traditional artforms.
His silent act of creation speaks thunderously that
the people of this place and their traditions remain
unerased by the bleach of colonization.